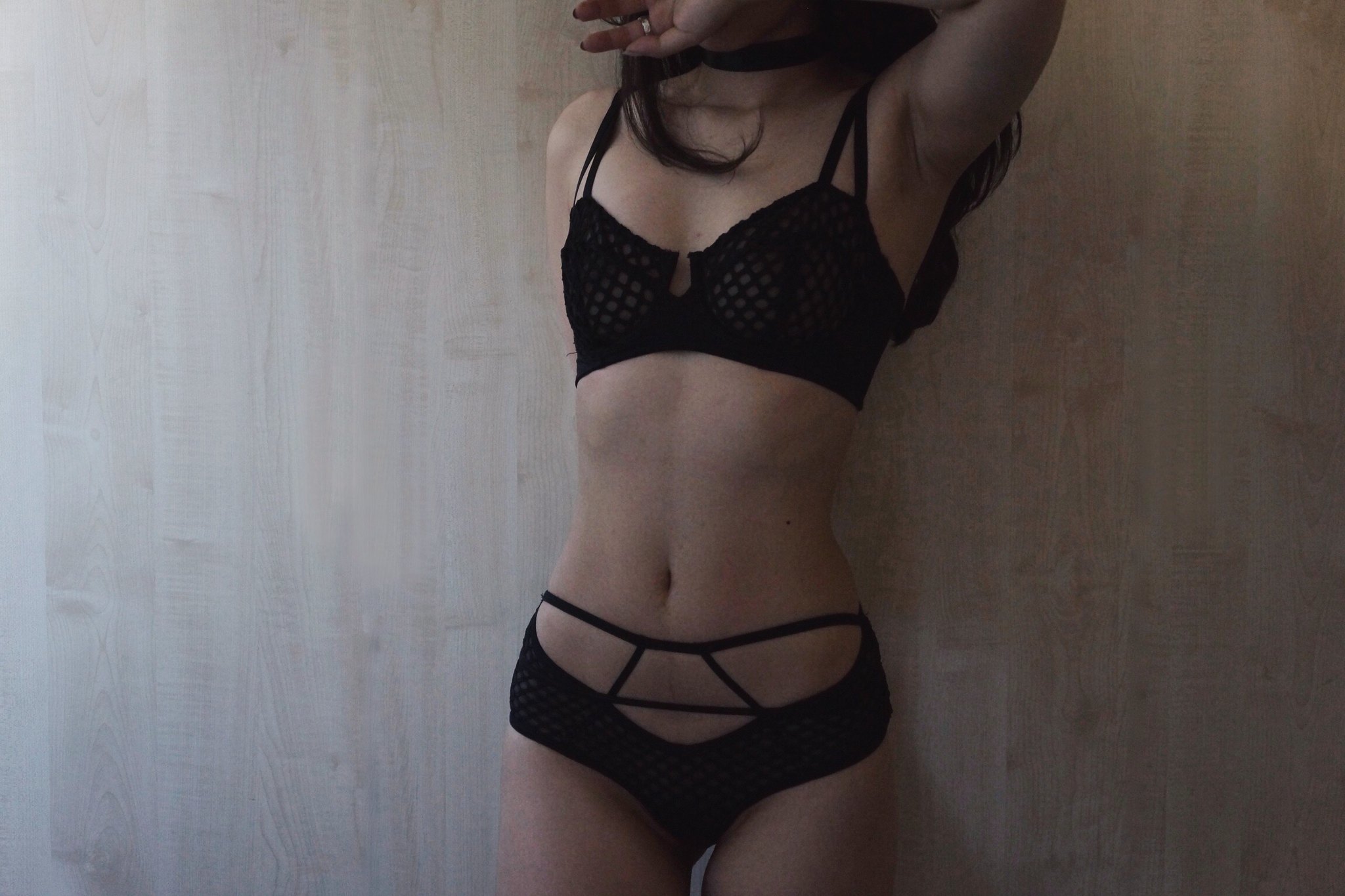 
Playful Promises is a well established, London based, indie label, and were perhaps one of the first names I came across when I fell down this lingerie rabbit hole a few years ago. Rebecca from Playful Promises reached out to me asking if I would like to review one of their sets from the A/W 2016 collection, to which I gleefully accepted.

Rosaline is an underwired bra made with a microfibre fishnet mesh from Playful Promises' diffusion line, Peek & Beau. The cups are fully lined with mesh, and is therefore good for individuals with pierced nipples as this means that the piercing won't get caught in the netting. I was drawn to Rosaline not only due to the choice of fabric but also because of the extended underwires and wide-set gore, which created such an interesting shape. I received the Rosaline set in a 32C and XS – I went for a size up from my usual sister size of 32B as I was in-between cup sizes at that time. On me, the gore sits much closer together unlike what was depicted in the product photos, which I found a little disappointing. The underwires also don't sit flat but instead hovers about a centimetre from my chest, as you can see from the small shadow casted. Because of this, the underwires feel like they are of little use and my breasts don't feel encased or lifted at all. Although the fabric does sit flat on my bust, and the underwires are of the right size (i.e. they are not too narrow/too wide), I suspect that the cups may be too big for me due to my shallow bust, and I'm unable to fill out the cups to its full potential. Perhaps if I had gone down a cup size, the fit would be improved.

The high waisted briefs on the other hand were somewhat true to size, but a little on the smaller side. The XS briefs felt snug on and maybe even a bit restricting. Thankfully it did not cut in, but I would recommend to size up from your usual size. Personally I don't really like how these look on me as they sit at a very awkward height on my hips, making my torso look incredibly long. It is also one of my pet peeves when brands call briefs like these 'high-waisted' when it doesn't even reach the belly button. Despite so, I still appreciate the design of Rosaline but just not on me.

Rosaline is currently on sale at Playful Promises at a discounted price. Fit issues aside, I do think this is a set worth getting at its price point as it is definitely a functional everyday piece with an architectural twist.
Posted by D. Labels: playful promises, reviews
Older Post

This blog began in late 2014 as a contribution to the small bust lingerie community, which is often overlooked, underrepresented, and quite simply, sized out in the lingerie scene. Having implicitly learnt whilst growing up that pretty lingerie was 'not for me' due to a small bust size, this blog is for all the ladies who have ever felt this way.
The author (D.) has other interests in fashion design and the avant-garde. Hence, this platform also acts as a creative outlet in bridging these constructs, through the styling of lingerie as outerwear pieces. Lingerie need not be hidden, it deserves to be shown off and quintessentially, it can be anything you want it to be.